The KTO Rosomak is the Polish designation for the Finnish Patria AMV 8×8 Combat Vehicle. The KTO Rosmak is built under licence in Poland by WZM S.A. and has received a number of modifications to meet the needs of the Polish Army. 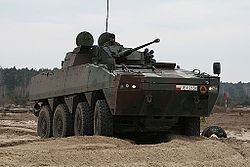 KTO is an abbreviation for Kołowy Transporter Opancerzony, which is Polish for “Wheeled Armored Vehicle” and Rosomak means “Wolverine”. First orders for the vehicle was placed in 2002. KTO Rosomak Infantry Fighting Vehicle is used to transport 8 troops into battle and to provide them with direct fire support.

The 2 man Oto Melara Hitfist-30P gun turret armed with the 30mm ATK Mk44 chain gun and 7.62mm NATO UKM-2000C coaxial Machine Gun. It has a modern fire control system with thermal sight and stabilization to the cannon for accurate firing on the move. Its Active Protection System is the Obra laser warning system connected to six 81mm 902A ZM Dezamet smoke grenade launchers. Some are equipped with the Spike ATGM, with a launcher mounted on either side of the turret.

The Finnish Patria AMV was has been developed to provide optimal modularity of components and to be adaptable for a wide range of variants. The Rosomak is manufactured in the following variants for Polish Land Forces: Between 2002 and January 2015 a total of 977 vehicles have been ordered with final deliveries expected to be completed in 2019. 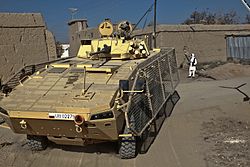 During the war in Afghanistan the KTO Rosomark was fitted with initially fitted with additional steel-composite armor, upgraded communications, wire cutters in front of driver and commander hatch, external video cameras for improved Situational Awareness and the Pilar system for directional detection of incoming fire. Because of additional armor this variant cannot float and has no water propellers.

This variant was further upgraded to the KTO Rosomak-M1M, which had QinetiQ RPGNet for defeating Taliban RPG attacks and a new sand camouflage. The new nets proved effective during attacks and offered the added bonus of being lighter compared to Bar armor, thus offering better mobility.

The Rosomak was also deployed with Polish Land Forces as part of the EUFOR Tchad/RCA mission to Chad.

The Rosomak-M is a modernised version with an upgraded Hitfist-30P turret equipped with two Spike-LR anti-tank guided missile (ATGM) launchers and increased storage of 30mm rounds. The upgraded turret has an increased weight capacity for adding onboard Rosomak Battlefield Management System (BMS). The air conditioning system is also improved and new anti-blast seats are installed.

The Polish version of the Patria AMV XP.

Fitted with a Cockerill Mechanical Industries (CMI) XC-8 120HP turret armed with a 120mm Calibre Length 47 smoothbore main gun. this turret has been fitted and displayed on such vehicles as the CV90120T, South Korean K21 tracked Infantry Fighting Vehicle and Patria AMV. Other than production for just the Polish Army, WZM S.A are able to export the Rosomak to other countries, something which is not possible with all production licence agreements. It is understood that the KTO Rosomak has only been trialled by Malaysia.